In China's heavy truck user community, there is a long-term understanding: that is a good heavy truck, we must use a good engine, is the so-called "good horse with a good saddle." For users, what is the standard for a good engine? That is big power and large displacement. Therefore, with such an understanding, when truck users and drivers chat with each other about their cars, the first sentence is usually: â€œHow big is your engine? How much is it?â€

In fact, it is not entirely unreasonable for users to use this simple method to judge the quality of heavy trucks. Because in recent years, the development trend of China's heavy truck products, it is precisely the higher the more heavy-duty trucks, the greater the engine power and displacement. At present, the domestic high-end heavy truck engine power is concentrated in 340 to 400 horsepower, while the displacement is 11 to 13 liters. 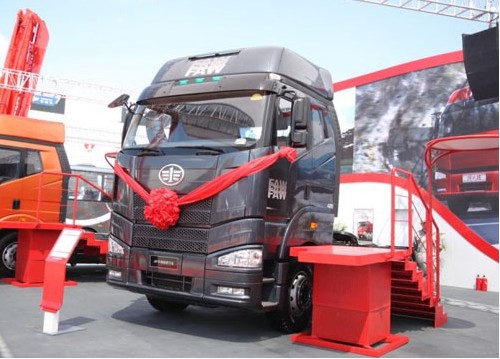 Take the current domestic mainstream high-end heavy truck as an example: The J6 released by FAW has 11-liter 6DM and 13-liter 6DN engines that can be matched with 390, 420, and 460 horsepower. The Dongfeng commercial vehicle Tianlong heavy truck is equipped with Renault. The 11-liter dCi11 engine can provide power of 340 and 375 horsepower; Shanxi Automobile's DeLong F3000 uses a Weichai 12-liter engine WP12, which covers 270 to 480 horsepower, and is highly sought after by users; Futian Auman's 9 series. Heavy truck, also introduced the use of Weichai WP12 high-end tractors, and in the future may also use OM457 heavy truck engine, displacement is 12 liters; China Heavy Truck Hao Hao A7, optional D12 engine, power coverage 340 ~ 460 horsepower In addition, SAIC Iveco Hongyan's Jieshi, Valin's Xing Kaima, etc., have joined the "high-power heavy truck club."

Obviously, the upgrading of heavy-duty trucks is not a matter of wishful thinking for heavy-duty truck companies, but an inevitable demand for heavy-duty trucks. As we all know, in recent years, the rapid development of China's logistics industry, high-speed logistics, container transport and even suspension of transport has become the main form of truck logistics. In particular, the most popular drop-and-hook transport, a tractor accompanied by several trailers, truly all-weather use of the tractor. This requires that the tractor must be highly efficient, safe, and durable. These features necessarily require the use of high-power, large-displacement engines.

Why do you say this way?

Anyone who has learned the engine knows that in the case of a certain material of the engine block, the pressure that the cylinder can withstand has a maximum value. If it exceeds this threshold, it will burst the cylinder. Obviously, the explosion of the cylinder means that the engine is scrapped; For a small-displacement diesel engine that wants to increase power, there is only one way to increase the speed, but this brings with it oil and durability. The large-displacement diesel engine just makes up for this defect. By increasing the bore diameter and piston stroke, the power can be adjusted well, without wasting fuel due to excessive wear, increasing the service life and safety of the whole machine, and reducing Fuel consumption. This is why the heavy-duty trucks in Europe and the United States have large displacements and low speeds.

Let's take a look at the European and American heavy-duty truck market with more mature logistics transportation. More than 60% of heavy-duty products are equipped with engine power in the range of 400-450 hp, while engine displacements above 300 hp are basically concentrated in the range of 11-15 liters, of which about 12 liters. The displacement of high-speed diesel engines is internationally known as "gold displacement."